Instagram’s trying out a new way to help users create more engaging Reels clips, while it’s also testing a new option to promote Reels in your main feed, as it works to compete against the rising threat of TikTok.

First off, as first reported by Business Insider, Instagram’s testing a new ‘Templates’ process with some Reels creators, which enables users to replicate the format of a Reels clip that they’ve seen in their own content.

As you can see in this example, shared by app researcher Alessandro Paluzzi, the Templates process enables creators to use any Reels clip as a template, which then creates a framework of clips that matches the time stamps of that Reel. You can then insert your own clips into these frame markers, enabling you to essentially copy the format of the clip.

Instagram REELS announced a new feature! “Use as template” allows user to replace the clips with your own and it will match the time stamps of the template reel. Let me know what you think of this feature. Does this make you want to create more reels? pic.twitter.com/rLMJAX89jG

It could be a simple way to improve the timing of your Reels clips, by using any other clip you see as creative inspiration. And if you’re having trouble coming up with new ideas, or your uploads just don’t look as cool as those you’re seeing in the app, this could be a simple option to construct better content – though it could also encourage plagiarism of other people’s ideas.

But then again, remixing is a key engagement element in TikTok (and is also available in Reels), and so long as you’re not copying an idea frame-for-frame, with no credit to the original, it could be okay. But it does seem like it’s perfectly aligned with doing just that, which could be a problem – especially given that Instagram just this week announced a new algorithm update to better promote original content creators in the app.

I mean, re-creating your own variation of another clip isn’t copying, as such, but it is taking someone else’s idea. Evidently, this is not the kind of replication that Instagram’s looking to stamp out with its new algorithm change.

Instagram has confirmed to TechCrunch that the new Template feature is currently being tested ‘with a small group of creators’.

In addition to this, Instagram’s also testing out another way to boost interest in Reels content, with new, full-screen Reels promo tabs in the main feed. 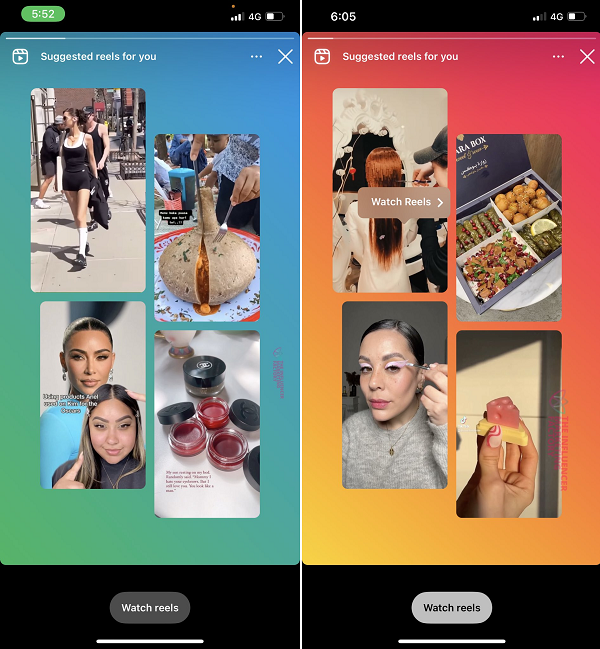 As you can see in this example, shared on Twitter by @marselladondi, the new approach highlights several Reels within a single frame. Users can then tap on any Reels thumbnail to switch to the Reels feed, or tap on the ‘Watch Reels’ CTA at the bottom.

It’s another way for IG to lean into the short-form video trend, which it’s made no secret about in its product announcements.

Back in December, Instagram chief Adam Mosseri said that video would be a key focus for IG in 2022, with Reels being the main element.

The ultimate next step, then seems to be this next-level format, which incorporates feed posts, Reels and Stories into a single-stream UI in the app.

That would put more focus on its video elements, while also presenting everything in full-screen, which will give the platform more info on your interests and engagement, based on each specific type of content as it’s displayed.

And with TikTok continuing its meteoric rise, and taking up more consumer attention, especially among younger audiences, it makes sense for Instagram to also align with the same trends. These new options are the latest in its ongoing effort to evolve in line with the rising video app.

The State of Social Listening in 2022 – Improving Your Listening Process

What Does the Data Tell Us About Luxury Brands Now? I Traackr

How To Fix Loss of Productivity at Work