Remember when Clubhouse was the thing in social media circles, with people doing anything that they could to get invited into the app – and some even buying invites for hundreds of dollars on eBay?

Those days are long gone, with more recent reports suggesting that the app is struggling to maintain relevance, which has led to a shift in strategy away from structured programming, and more towards ‘live chilling’ and facilitating virtual hangouts.

Which appears to be part of this latest move, with Clubhouse now testing private groups as a means to enable more intimate interaction in the app.

As reported by Bloomberg:

“The feature, which previously went by the name Social Clubs and is now known as Houses, appeared on some users’ phones in recent weeks. On Wednesday, the functionality appeared to be removed from some phones after Bloomberg requested comment from Clubhouse, but it remained active for other users.”

That would align with the aforementioned strategic shift, as Clubhouse seeks to recapture what made it such a compelling platform to begin with, and get more users back into the app.

Will that work? Could that be a way to get more people to open up the app once again, and check out what’s happening via live audio?

Clearly, Clubhouse needs to try something.

According to reports, Clubhouse saw 3.8 million new installs globally between January 1st and May 31st his year, compared to 19 million installs during the same period in 2021, an 80% year-over-year decline.

Clubhouse had been seeing steady growth in India, and other regions outside the US, which pointed to future potential, despite the dimming of its spotlight. But now it seems like those trends are in decline as well, and if Clubhouse can’t recapture the magic, in some form, we could be seeing the final stages for the app, which, at one stage, was valued at $4 billion.

Clubhouse is also trying new in-app tools and features, including Reactions within Rooms and other response options. 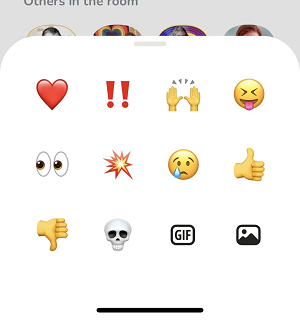 Which are interesting, and add more interactive capacity within its audio spaces. But none of these seem to be significant enough to re-ignite any major interest in the app, which may well now be entirely out of reach as the hype around social audio, in general, fades away.

Twitter Spaces isn’t seemingly faring a lot better, and Reddit Talk doesn’t look to be catching on in a major way. Facebook basically gave up on the option, in favor of its metaverse shift, and increasingly, it is seeming like audio rooms were a pandemic-enhanced trend, which don’t really have a place in most longer-term strategies and audience engagement processes.

That’s not to say it’s useless. Much like live video, there will always be some level of value in the option, and there are some great hosts and shows that still attract a lot of interest and engagement. But the mass appeal of such seems to be gone – which is not as big a deal for other apps, which bolted on social audio options to latch onto the trend.

But it is a big deal for Clubhouse, which doesn’t have anything else to fall back on.

Could Clubhouse still succeed? Sure, there’s still a lot of interest in the app, and that could spark a new wave, at some stage. But its pathway to maintaining relevance is looking more and more challenging, which, eventually, will prompt some tough questions at Clubhouse HQ about how it advances to its next stage.

There is still hope for Clubhouse fans, and there are still shows that are worthy of support. But I wouldn’t be banking on the app still being on your phone this time next year.

How a Link in Bio Instagram Tool Can Grow Your Brand

Meta is Depreciating its Video ‘Premieres’ Option on Facebook