Over drinks with a girlfriend a few weeks ago, we were lamenting the fact that media has become so distrusted and that social media, for better or worse, has become the place people go to get their information.

The unbiased work of the journalist of past, coupled with the fact-checkers who have been caught up in layoffs and furloughs over the years, have created some of this, but so has the idea that you can post anything your heart desires and have it go “viral”, whether it’s true or not.

Anyone who has been in the industry since 2016 has seen journalism go up in flames. To boot, the Edelman Trust Barometer indicates the media (and the government, too) has fueled a cycle of distrust—something that is almost certainly never to be regained.

The good news is that owned media has become a centerpiece for many organizations in the last several years. As there is a greater expectation for businesses to lead as trust in our institutions continues to spiral, we have an opportunity to use our owned media prowess to become more trusted than media outlets and government, combined.

We’re In a Cycle of Distrust

The Edelman Trust Barometer has an interesting graphic this year. It shows the trust in all institutions since 2001. It shows that there have been ups and downs in trust, but overall, we’ve trusted government, media, businesses, and NGOs. 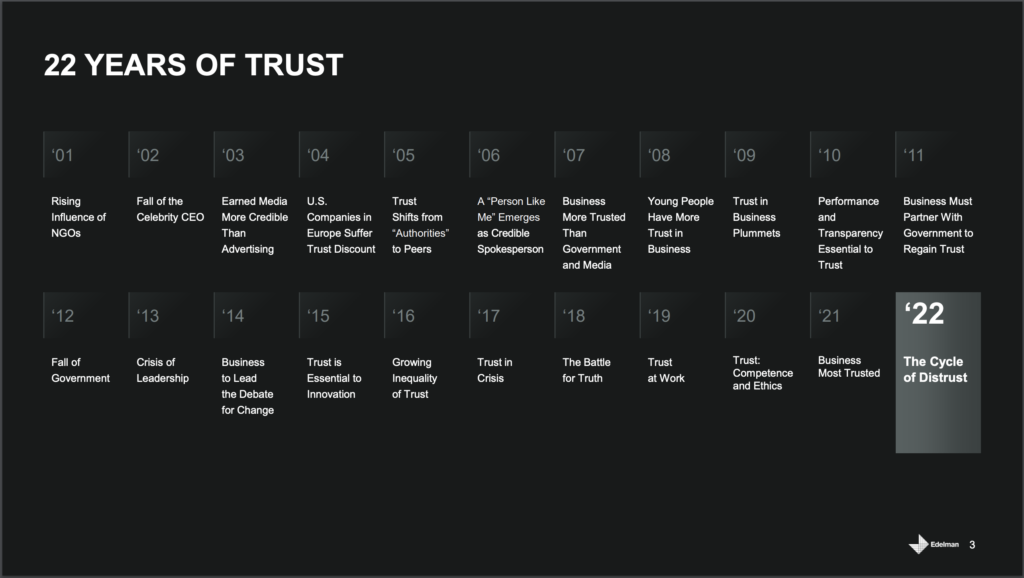 Starting in 2022, though, a cycle of distrust has begun and no one anticipates it to recover.

The good news, though, is that businesses are still trusted (well, at least more than government and media), and we have an opportunity to report on our industries in ways that allow us to continue to build trust.

Before we get into that, though, I’d like you to imagine a world where the content you create every day is more trusted than The New York Times or the Wall Street Journal.

Seems kind of impossible, right? It doesn’t have to be! With the right editorial team, some fact-checkers, and a willingness to promote everyone in the industry—including competitors—it’s not that far-fetched.

Today, government and media as seen as divisive, while businesses are seen as a unifying source in society.

But that means there is real power in trustworthy content. People are desperate for facts and they want to know the truth. They don’t want to hear the talking points that the television pundits throw out. Rather, they want to understand the facts for themselves and make up their own minds.

As a communicator in charge of storytelling through compelling content, if you can put out good information that’s trustworthy and fact-based, you will win the trust game AND the sales game.

The challenge becomes that as businesses begin to stand up and present content in new and interesting ways, people will turn to them to stabilize society by taking on societal problems that are likely beyond their abilities.

When you think about some of the challenges that society faces today—climate change, discrimination (which I can tell you from experience is very alive and well today), job loss, and income inequality—it becomes a pretty big burden for businesses to take on.

At the same time, there is an opportunity to stand up for what we believe in and for our values, both as individuals and as organizations. And, while we may not individually fix societal problems, we can collectively.

The Patagonia CEO has already set us on the right path by donating his company’s profits to organizations that fight climate change. While that isn’t content-specific, it has provided a gazillion content opportunities. And not just for them, but for media, bloggers, and influencers, too.

And, while you may not be able to get your CEO to do the same, there are lots of content opportunities in the work your organization does and how the values of the people inside affect the industry, its people, and even society.

Things such as a youth sports organization creating an opportunity for all kids to play sports if they want, no matter what their income level is. Or Dove giving women confidence versus anxiety when it comes to their own beauty. Or Microsoft committing to be carbon neutral by 2030 and, by 2050, offsetting all of its emissions.

Why Organizations Are More Trusted

Part of the reason organizations are more trusted today than government or traditional media is because of the commitments and actions so many of its people made during the pandemic.

Yet, there is more work to be done, particularly if we’re all to change the way society functions, not just in creating results for our organizations.

The opportunity now for business leaders—and for the people telling the stories—is to assess what earns trust among your communities, set up matching priorities, monitor progress, and take quick action to admit and fix problems when they occur.

None of this is new to a communicator. It’s what we do naturally. But this can lead our strategic decisions and how we present our content.

This means the organization is living and breathing these things—not that there is a PR campaign around them not supported by its claims.

For instance, if a company is required to meet diversity targets for their workforce and they fail to achieve those goals, the executives lose pay. Or if a goal is set to increase wages for the lowest paid employees by a certain date and that goal isn’t met, those monies are taken from the highest paid employees.

Again, these are things you can’t implement, but you can affect them and you certainly can communicate them.

One brilliant and very recent example of this is what happened to Fast Company. Their content management system was breached and two obscene and racist push notifications were sent to their followers through Apple News.

As soon as it happened, they took their site down and posted a statement that read, “Fast Company’s content management system was breached Tuesday evening. As a result, two obscene and racist push notifications were sent to our followers in Apple News about a minute apart. The messages are vile and are not in line with the content and ethos of Fast Company. Tuesday’s breach follows an apparently related event that occurred Sunday afternoon on FastCompany.com when an unknown actor (or actors) posted similar language on the site’s home page and other pages. Fast Company regrets that such abhorrent language appeared on our platforms and in Apple News, and we apologize to anyone who saw it before it was taken down. We immediately retained a leading global incident response and cybersecurity firm and together are investigating the situation. We have shut down FastCompany.com until the situation is resolved.

“While we continue to work on the site, we will be continuing to publish news and analysis on our social channels.” 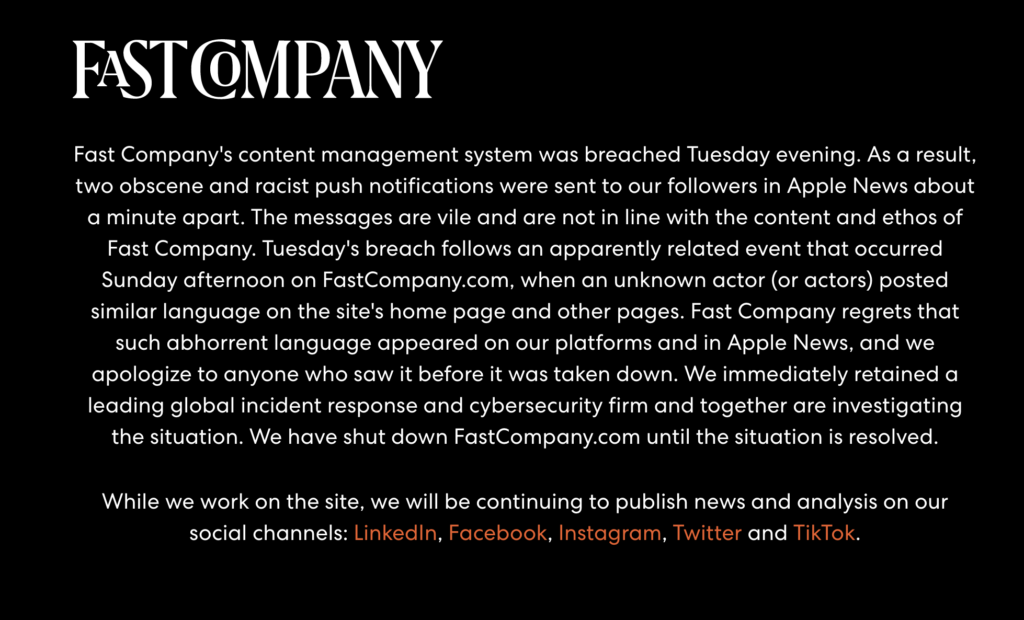 So what did they do that was perfect? They admitted they’d been hacked and they took responsibility quickly and honestly. As the week between when it happened and when they were back online (eight days!), they channeled their work into “zero-click content,” or content that lives exclusively on the social networks with no expectation that they would click through to their site.

They started with LinkedIn and then on Instagram, Facebook, Twitter, TikTok, and Medium. They also launched Fast Company Daily, a LinkedIn newsletter that amassed 103,000 subscribers when it launched! When news broke that Elon Musk once again wants to buy Twitter (eye roll emoji!), they covered it in real-time on Twitter Spaces.

In a published letter from editor-in-chief, Brendan Vaughn, he talked about how quickly his team responded and how they shined in a moment of “unprecedented challenge.”

Build Trust Through Your Work

So now we know Fast Company is even more dedicated to subscriber data protection. They’ve treated employees well. It’s clear they handled all of this with a strong command of ethics. And they admitted their mistake early and quickly.

Combined with providing the facts as they unfolded and keeping their readers apprised, they built even more trust (with more than 108,000 subscribers now!!) than they had before. All through their content.

There are lots of content marketing lessons (and crisis comms, too) in all of these examples, and it’s fun to watch organizations build trust in real time. Now it’s your turn to roll up your sleeves and build a plan that allows your organization to continue to build trust among its audiences.

Instagram Analytics: How to Analyze and Use Your Data

2023 Resolutions to Make For Your Influencer Marketing Strategy I Traackr