This may not be hugely relevant from a social media marketing perspective right now, but it is worth noting, especially if you’re trying to connect with younger user groups.

Today, gaming-focused messaging platform Discord has announced that it has acquired ‘Gas’, the rising social app which enables teen users to send anonymous compliments to their friends. 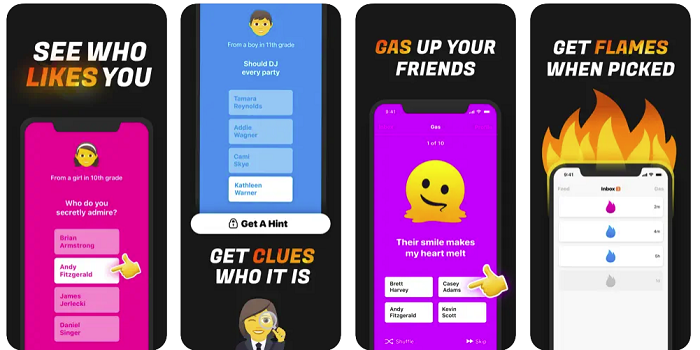 Created by former Facebook product manager Nikita Bier, who also created the very similar tbh (which Meta acquired in 2017), Gas is specifically focused on high school students, enabling users to sign up and join their school, then participate in positive polls and activities with their classmates.

Which has proven popular. Over the last few months, Gas has regularly ranked in the App Store’s top 10 most downloaded charts, even beating out TikTok on several occasions. As of October, the app was already seeing more than a million daily active users, just a month after launch, and despite only being available in selected US regions.

It even has the framework of a non-ad-funded monetization system in place, with users able to pay $7 a week for ‘God Mode’, which gives them hints about who voted for them in polls, and other bonus features.

Discord has been looking for ways to branch out into new areas, trying out new elements like audio channels, as it seeks to expand beyond its gaming roots. The app did see a lot more attention amid the NFT boom, with virtually every NFT project relying on Discord to build community. But with the NFT hype dying down, Discord is now seeking new opportunities, as it works to become a bigger element in the social media landscape.

Gas could help it drive more usage, through enhanced connection with younger audiences – and as noted, while right now, it’s still a relatively minor consideration in terms of overall trends and shifts, it is worthy of note, especially given the growth potential of the app.

If Gas is able to scale effectively, and incorporate additional engagement elements, like audio and visual tools, it could well become a much bigger focus for many marketers looking to reach young audiences.

Whether Gas, or new owner Discord, looks to capitalize on such is another question, but there is a chance that Gas could become the youth app of 2023.

Which, potentially, could impact TikTok, Instagram, and maybe most significantly, Snapchat.

JMP: Time spent on $SNAP “continues to decline .. a direct consequence of increased competition from Reels and YouTube Shorts .. we believe these platforms are now reaching an inflection point in scaling heading into 2023.”

If Snap is superseded as a key connective app among teens, that could have major implications for the future of the platform. Gas isn’t a Snap replacement as yet, as it doesn’t have messaging functionality. But combine Discord and Gas together and what do you get?

Have no doubt that Snap, in particular, will be holding internal meetings to discuss this news.

It’ll take time to develop, before we can truly assess what this acquisition will mean for these trends. But it is worthy of note, and something to keep an eye on throughout the year.

Software Essentials That Every Digital Nomad Needs in 2023

Donald Trump Might Make A Triumphant Return To Social Media (After That: So Long Truth Social)

What is AI Art and How Does it Work?

Your Ideal Influencer: A Guide to Find Your Creator

Looking to Grow Instagram Followers? Here’s 10 Tips to Use TODAY!

Negotiating with Influencers I Traackr